Shrine Building at the Vancouver Playhouse 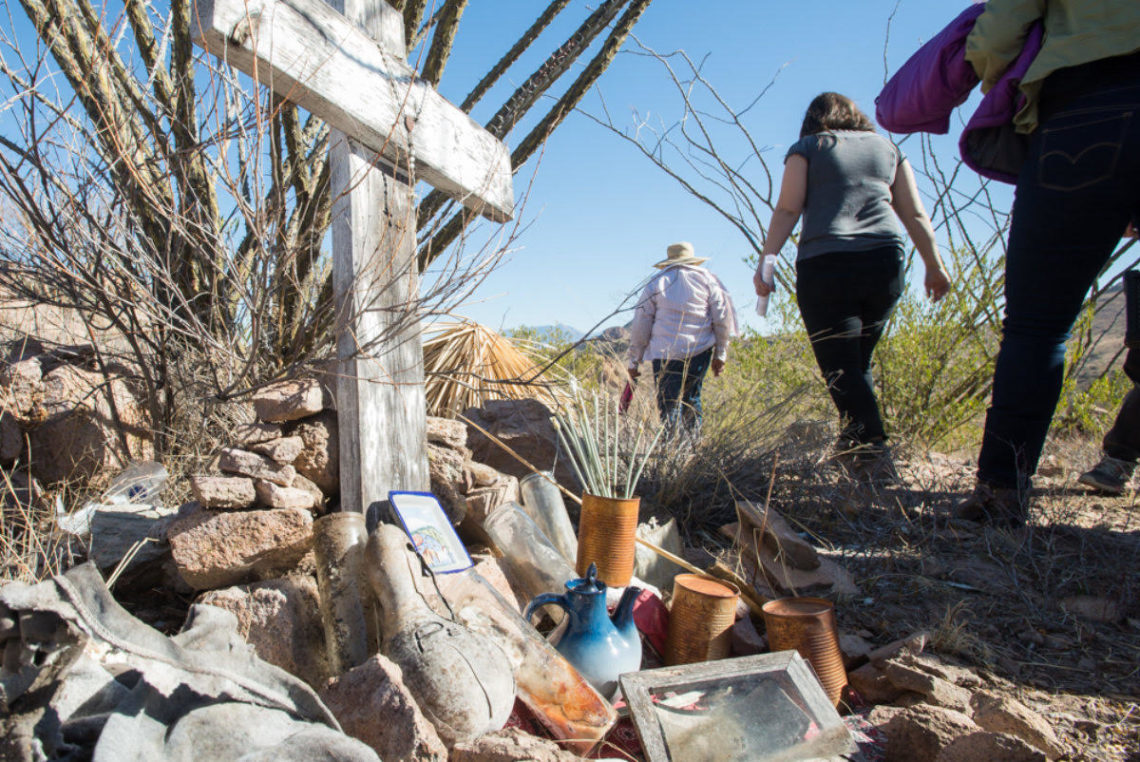 Supported by the Department of Canadian Heritage.

Materials are provided, participants welcome to bring personal items to pay tribute and commemorate people affected by borders or migration, to add to the shrine.

Shrine building will be available to audiences of Anywhere But Here one hour prior to, and during the performance.

A play by Carmen Aguirre

“There are examples of shrines from all traditions and cultures worldwide. It is a human impulse to want to outwardly express our grief, pain, suffering or heart felt longing – both for our own focus/ritual action, and as a physical manifestation of our internal emotion out into the world. When we create a shrine in a public context, it is a way to ask others to witness and share with us, and we with them.” – Marina Szijarto, co-organizer and artist in residence of Night for All Souls at Mountain View Cemetery

Anywhere But Here will bring the tools of shrine-building to the community, to bear witness to the many lives lost on borders around the world, and particularly at the Mexico/U.S. border. The vast majority of Canadians are, or are descended from, people who migrated to this land from another place. According to Statistics Canada, more than 40% of the Metro Vancouver population self-identifies as immigrants. Carmen Aguirre’s new play Anywhere But Here, premiering at the Vancouver Playhouse from February 4 – 15, 2020, shines a spotlight on the forces of migration, the consequences of political exile, and the communities that form in response.

Each year, an undocumented number of migrants die or are killed during their journeys to escape political persecution and the impacts of neoliberal colonialism. The International Organization for Migration (IOM)’s Missing Migrants Project, the only current effort to collect data on migrant deaths worldwide, has recorded the deaths and disappearances of more than 33,400 women, men and children since beginning data collection in 2014.

In the Americas, more than 3,600 people have been reported dead or missing during migration since 2014. Sixty percent of these deaths were documented on the border between Mexico and the United States, where commemorative shrines paying tribute to migrants pepper the landscape between these two nations.

While these shrines honour the dead, they also support the living, as sites to find water and essentials to survive,  left by fellow migrants and good Samaritans. They have become undeniable symbols of the human cost of political borders and exile. This is precisely the world in which Carmen, who herself was exiled as a political refugee, has set Anywhere But Here.

Electric Company Theatre, Playwrights Theatre Centre and Vancouver Civic Theatres are hosting a community-based shrine-building project in the Lobby of the Vancouver Playhouse, to honour the undocumented migrants of the Americas and beyond, and to remember those lost on their journey. Two shrine creation workshops with Mountain View Cemetery Artist in Residence Marina Szjiarto will be offered free to the public, with shrine building activities offered before each performance of Anywhere But Here.

“Through a photo, a poem, or symbolic object created in the moment,  participants will testify to their own experiences, while bearing witness to others’. Our creative team’s shrine has been a quiet space to contemplate the meaning of the play in our lives and in the world. We are so honoured to share that experience with the community. ” – Heidi Taylor, Artistic & Executive Director, Playwrights Theatre Centre

Following the performance run of Anywhere But Here, shrine commemorations will be safely and respectfully stored and transported to Mountain View Cemetery and be burned or buried as part of a ceremonial dedication at the Night for All Souls, which coincides with Día de los Muertos (Day of the Dead) on November 2.

“A shrine is a sacred space into which we focus our emotions. It is a physical space created in a ritual manner – that has intention and meaning, upon which then ‘offerings’ can be made. We imbue a shrine with meaning by intention and by the way we interact with the objects and physical materials – the ritual of placement of our offerings, of movements (tying a cord, lighting a candle etc) and how we physically move in the space around it.

While creating and using a shrine, there is often a slowing down of time and movement – especially when one is in either shock and grief – all movements become a ritual in the creating of the shrine. Shrines can be a simple leaf, photograph or rock to an elaborately built sculpture or a beautiful sacred space.” – Marina Szijarto, Artist in Residence at Mountain View Cemetery

Free shrine-building, inspired by dedications at the border between the US and Mexico, brings public awareness to the global migration crisis during the production of Carmen Aguirre’s new play.